My Road to Beervana

The Road to Beervana is well underway, with the Brewers Guild of New Zealand awards to be announced tomorrow, and the big event, Beervana, being held at Wellington’s Westpac Stadium on Friday and Saturday.

This year, my road to Beervana doesn’t properly begin until tomorrow – I drew the overnights roster at work for the week, so haven’t been able to make the most of the wealth of events on offer. While most sensible beer lovers will have taken the week off work, the boyf and I are heading on our dream beer trip to the United States in just 11 days time, so I felt it was more sensible to take it all a bit easier this year¹.

On Monday I managed to make it to a couple of the many beer events happening across Wellington. I began my night at the boyf’s work, Hashigo Zake, where they held the New Zealand launch of the Rogue Stout Glass. Oregon-based Rogue and Colorado-based Left Hand Brewery both worked with the premium glass manufacturer, Spiegelau, to create the perfect glass to drink stout from.

Hashigo had Rogue’s Nitro Shakespeare Stout on tap so customers could test how successfully the glass complimented the style of beer it was made for. I generally don’t drink before overnight shifts because I find even one beer makes me want to fall asleep at my computer come 3am. But not wanting to miss out, I insisted the boys behind the bar served my diet cola with lemon in the Rogue glass. 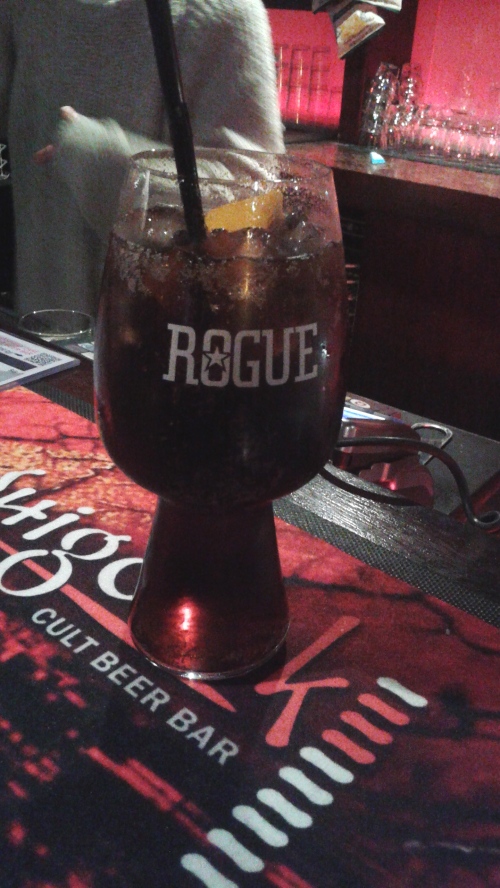 Diet Coca Cola with lemon in the Rogue Stout Glass – just because I’m not drinking doesn’t mean I have to miss out on the fun!

It’s a beautiful vessel – it’s light, the beer flows into the large ‘stem’ which makes it easier to warm the beer in the hand², and it has a wide base which is comforting, because it’s pretty sturdy when placed on the table. I don’t think it actually made any difference to my diet cola drinking experience, but as fellow blogger Phil Cook pointed out later in the evening – the Stout Glass is very similar to the Coca-Cola glass, it just has a more exaggerated shape.

Next stop was Golding’s Free Dive for the official launch of The Road to Beervana. A collaboration between 8 Wired and Portland’s Gigantic Brewing Company, PDXNZESB, was on tap, and so was cold water, which I sipped away at as everyone raved about the collaboration around me. The brewer at Gigantic was in attendance, and while I didn’t manage to have a chat to him, I did have a great conversation with the editor of the All About Beer magazine, John Holl, who’d only been in the country for a matter of hours.

Unfortunately it won’t be until tomorrow that I’ll be able to fully immerse myself in the beer events, and it then becomes a matter of what I’ll actually have time for! Before the awards dinner tomorrow, I plan to make it to either His Majesty’s Colonial Brewing Corps Officer’s Mess Hall at Garage Project, or The Pie and Beer Spectacular at the Sprig & Fern… perhaps if I only sleep a few hours after my shift ends tomorrow morning I’ll be able to make it to both!

Beervana this weekend is also promising to be better than ever – the festival is taking over a bigger chunk of the Westpac Stadium concourse than before, and according to the website, more than 200 beers will be available from right across the country and beyond.

After years of attending Beervana, I’ve finally settled on the fact that the Friday Day Session – Session One – is the best session to go to as a punter. It’s the only session that guarantees all beers will be available – some of the media brews, festival brews and beers available on brewery bars are incredibly limited, and last year some beers sold out partway through the first session, leaving the punters at all three other sessions wanting. It’s also the session with the least number attendees, so there are very few lines – if any – at the stands, and there are no crowds, making it easy to move around and find somewhere to sit.

On Saturday morning I’m excited to be joining in the judging of the Beervana Home Brew Competition, and then I’ll be back at the evening session to be my bit for the festival and volunteer.

Phew! Just as well I’ll have a full week to recover before the boyf and I get on a plane to Vancouver for our five-and-a-bit week holiday down the West Coast of the US.

¹ Last year I had the whole week off to enjoy the beer festivities, and by the final session of Beervana, I was so exhausted and had such a bad cold I was in bed by 9pm on the Saturday night.

² In my case, if I had drunk the cola at a slower rate I’m assuming it would have just made the ice melt more quickly than usual.