It’s every home brewer’s dream to have their beer made on a commercial scale. While many home brewers have recently, and successfully, made the leap to become a real life brewer¹, others dream of being handed the chance. While some try to impress local brewers with generous homebrewed samples, winning the coveted best beer award at the annual Society of Beer Advocates National Homebrew competition is what most of us really dream of. The prize? To have your beer brewed on a commercial scale at Auckland’s Hallertau Brewery. Big deal.

The winner of the 2012 best beer was Richard Deeble with his New Zealand Pale Ale entry. I was lucky enough to be an NHC table steward, and while our table didn’t get the chance to judge Richard’s beer, we did get to sample a selection of the NZ Pale Ale entries. And it’s no easy thing to brew a good pale ale. Of the 6-8 entries my table judged, we only gave out one medal, with all of the other beers too thin, too bitter or too faulty. So for Richard not only to brew a gold-medal-winning beer in that style, but to score the highest total score of the competition, he’s got to know what he’s doing. So I was really looking forward to tasting the commercially-brewed Deeble’s Pale Ale.

The beer went on tap in Wellington on Saturday, April the 27th at the Kelburn Village Pub, and there was quite a turnout. I bought myself a glass and managed to grab a seat with two Kelburn pub locals, Frances and Ted Verrity, and sat down for a taste. 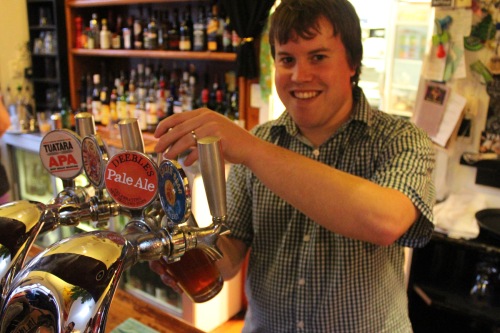 Deeble’s Pale Ale smelled like a pretty traditional NZ pale ale – earth, caramel, citrus. But I was impressed with the flavour – its earthiness was well-balanced by lemon and grapefruit characters, and the hops didn’t overpower the malt, with a good caramel kick to it all. At 5.9%, the beer was on the upper reaches of the style, but it tasted more around the 5% mark with a good body, but very drinkable. The beer was just a bit too sweet for my liking – I personally would’ve liked a slightly bigger bitter kick on the finish to balance that out, but I was impressed by Richard’s ability to pull off a tasty and easy-drinking pale ale – a pretty tough feat.

I managed to grab a couple of words with Richard as well, and was impressed to hear about his hopping schedule. He only started adding his hops with 15 minutes to go in the boil, and used Southern Cross as a flavour AND aroma hop, as well as using Pacific Jade to dry-hop with. I was surprised – Southern Cross and Pacific Jade are very popular among home brewers here in New Zealand, but usually only as a bittering hop. Bold move, but it worked!

This year marks my second year of home brewing², and while Richard managed to claim the top beer prize with just three years brewing experience, I feel I have a lot more to learn and a lot more experimenting to do before I might be lucky enough to do the same. But it doesn’t hurt to dream, right?

² While the boyf has been brewing for about four years now, I’ve only started developing and brewing my own recipes over the past 18 months or so.

One response to “A Homebrew Star”