Feature: We Want the Funk!

New Zealand’s growing craft beer scene will welcome a new member next week. Contract brewery Funk Estate is launching its first beer, a black IPA, at Wellington’s cult beer bar, Hashigo Zake, on Tuesday, May 22. But who’s behind this funky new brewery? And what can the beer-drinking public expect from them? I sat down with them to find out.

The four people behind Funk Estate, Dan Lord, Dylan Shearer, Jordan Evison and Shiggy Takagi, invited me to come and talk to them during a photo shoot on a warm Autumn evening. Even before the interview began, it was clear Funk Estate was not your ordinary craft brewery. I entered Dan’s flat to find the guys kitted out in retro outfits, making the final adjustments to the set of their shoot. It was the first time I’d even heard of a brewery doing a photo shoot¹, let alone seen promotional photographs where neither brewing equipment nor any products were in the shot.

But it soon became clear that this was very much their way of doing things. A photograph was needed for a Pursuit of Hoppiness news brief, and the Funk Estate guys were determined to get the perfect picture. In a lot of ways it was a serious exercise – a professional camera and proper lighting were used, and the retro lounge set was moved outside for the second half of the shoot to mix things up. But with music blaring, silly photos and jokes constantly flying around, they were definitely having a lot of fun with it all.

The brewery name, Funk Estate, also reflects that serious, yet fun, attitude. Jordan said it was difficult trying to find just the right name for the brewery. “The name took quite a few weeks to come up with. We had a huge list, and then we had a medium-sized list, and then a huge list again. Eventually we came up with Funk Estate,” he said.

Dan said that both words are able to stand on their own, and individually have a lot of meaning. “The ‘Estate’ sort of points towards high end or quality. We looked at a lot of high end wines on their estates, and these really elite rums on their estates and we thought, yeah, we can produce a product that’s a similar quality – but we’re going to make it funky!”

Dylan agrees. “It was that idea of combining a serious, formal element and an element that’s just for fun.”

While all four men are in their twenties and have a passion for home brewing and good beer, they’ve all entered into this venture with slightly different experience and perspectives.

Software developer, Dan Lord, is the company’s IT manager. He’s been home brewing for about four years and has done the Massey University brewing short course in Palmerston North, where students use a 200-litre micro-brewery. 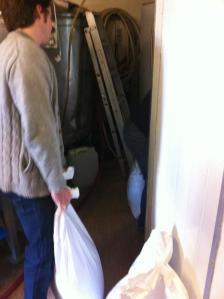 Jordan with a sack of grain for the first Funk Estate brew. Photo courtesy of Funk Estate.

Victoria University student, Dylan Shearer, is in his fourth year of a landscape architecture degree, earning him the role of design manager. He’s also been home brewing for about four years, and works part time at the Southern Cross bar in central Wellington.

Recent university graduate, Jordan Evison, has been home brewing with Dylan for a couple of years, and is currently working as an analyst at Contact Energy. His business partners say his good organisation skills and his intricate knowledge of Excel have earned him the role of business manager.

And Hashigo Zake bartender, Shiggy Takagi, is the Funk Estate production manager. He’s been home brewing pretty much every week for about the past two years and also started the bi-monthly² home brewers tasting and feedback sessions at Hashigo.

In fact, if it wasn’t for Shiggy, there wouldn’t be a Funk Estate to talk about. Shiggy’s passion for craft beer lead him to explore ways to get more involved with the industry. “Before [Funk Estate] I was writing a business plan for a homebrew shop!  I just wanted to start something to do with beer, because I was having so much fun at the bar and met so many people working in this industry. I was like yeah, let’s do something, it will be fun, it will be surprising.”

Shiggy says he approached his business partners, whom he all met through the bar, after seeing the success of the new Wellington brewery, ParrotDog. “They started and then we thought, maybe we can do this too.”

Jordan says it was the kick   start they needed. “I think   for all of us, individually,  we’d all thought about [starting a brewery] at some point. And then seeing someone else be successful like that and then having the opportunity when Shiggy came and spoke to us it kind of just all came together at the right time.”

The brewers are also pretty confident that their first beer, a New Zealand-hopped black IPA, will be a hit. It’s a recipe that won Shiggy a gold medal at last year’s annual SOBA National Home Brew competition and Dylan says it should be a stand out compared to other local craft beers. “We chose black IPA because it’s a style that we all really like and there are only a couple of them out there.”

Dan, Jordan and Shiggy drove up to Kawerau in the Bay of Plenty to brew the Black IPA at Aotearoa Breweries³ on April 18. While Dan had brewed on the Massey 200-litre kit before and Shiggy had had his first large-scale brewing experience just a week before at Galbraiths in Auckland, all of them said that it was a new and enjoyable experience.

Shiggy pulling his weight on brew day one. Photo courtesy of Funk Estate

Jordan said it was a bit of a shock in some ways.  “It was pretty interesting for  me because I’d just gone from 20 litres straight to 1200. Personally, I wasn’t really too sure what to expect.  But when we got up there, [the brewers] were just really good and we were able to do everything ourselves pretty much. They were there, hanging out with us, but we were very much doing it.”

Dylan was also full of praise. “They were really good brewers. [Head brewer] Tammy really knows her stuff and the assistant brewers are really good, they just get stuck in and do all this stuff, do all the cleaning, so we don’t have to worry about it.”

Funk Estate plans to continue using Aotearoa Breweries for the foreseeable future, and the guys want to continue their hands-on approach. All four of them are getting ready to drive up to Kawerau again on June 2 for their second brew – a coconut porter. It’s another recipe from Shiggy, and he said it’s a beer he’d always wanted to brew on a larger scale. “I was thinking maybe we could start off with the coconut porter because that’s what I wanted to do from a long time ago.”

Dan taking a sample of the black IPA from the fermenter for a taste. Photo courtesy of Funk Estate

But Shiggy said the porter will work a lot better as Funk Estate’s second release. “It’s for Beervana and also Brew NZ⁴, because this year the specialty category is vege and fruit beer. So we perfectly fit in that category [with the coconut porter].”

When talking about the brewery’s long term goals, Dan, Dylan, Jordan and Shiggy are very much keeping their options open. Shiggy says they’re hoping to continue to brew every couple of months during the next few years. “After a few years, maybe if it comes to how we are going to expand or something like that, we could either contract brew at more or different breweries, or get more investors on board and set up a brewery. We haven’t figured it out yet, it just depends on how we can build our reputation.”

Jordan says they want to focus on growing the Funk Estate brand. “A big part of it for us is not to lose momentum. To just keep going and always trying to come up with new things and different things, while at the same time doing what we think we’re good at.”

With so many contract craft breweries in the New Zealand market right now, I doubt Funk Estate will have any trouble standing out from the crowd. Dan, Dylan, Jordan and Shiggy are definitely serious about brewing good beer and bringing something different to the table, but plan on having a lot of fun at the same time. With their hands-on approach and high standards, I don’t doubt we’ll see something special from them over the coming years. Stand by for tasting notes – I’m counting down the days to the release!

¹ Considering most breweries use photographs taken during the brewing process or of their products to promote themselves.

² While this is the intention at least, I do think the timing is actually quite sporadic.