Most craft beer drinkers unashamedly identify the hops as the character they’re most drawn to in a beer. And as more and more varieties are born, New Zealand craft breweries are having a lot of fun experimenting with a wide range of hops.

One brewery which is known worldwide for its experimentation and well, balls, when it comes to brewing beer is Mikkeller. One of Mikkeller’s experiments has been dubbed the Single Hop Series – an educational series of beer. That is, one IPA recipe brewed over and over again, ingredient for ingredient, with the only difference being the variety of hop which is added. With all hops producing different flavours and alpha acids, it’s actually resulted in some very different tasting beers.

Mikkeller has produced more than 20 beers in the Single Hop Series¹, and Hashigo Zake has had some of the varieties available several times over the past two-and-a-half years. In their fridges at the moment, are bottles of the Centenial, Nelson Sauvin, Simcoe and Summit varieties.

I tried each of these beers at different times over the past couple of months, as well as the Citra – which Hashigo has now sold out of in bottles. Looking back through my notes, it’s quite interesting to see that while all of the beers are essentially the same (except for the hop), the only thing that doesn’t differ in my notes is their appearance.
Orange-red in colour, slightly cloudy, with big, fluffy white head – which quickly dissipates. 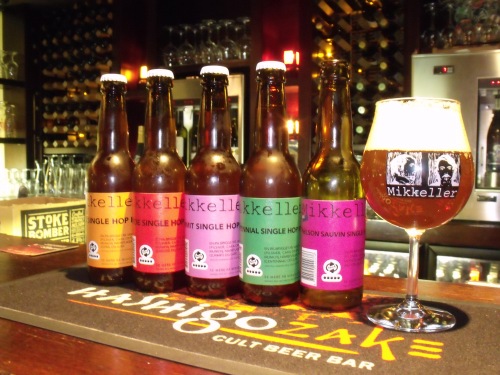 L-R: Citra, Simcoe, Summit, Centennial and Nelson Sauvin, which has also been poured into the glass. All 6.9% ABV.

The Centennial, which I swear I will drink the entire case of if someone doesn’t cotton on to this beer soon, smells sweaty, earthy and of sweet passionfruit and lemon.  It tastes bitter, earthy but mostly of passionfruit and citrus. Sweet, but not overly so, and the body I’ve listed as “okay”. Flavourful, but easy drinking.

The Citra smells very fresh. Earth, tropical fruit – particularly passionfruit – but it’s actually quite earthy on the nose. The flavour is initially well-balanced between the earth and tropical fruits, but there is a big, sweet, passionfruit aftertaste. It has a great body and to me was probably the sweetest of the five single hops I tried.

The Nelson Sauvin smells of grapefruit, passionfruit, with a slight pineapple note and a bit of that characteristic NZ earthiness that all NZ hops seem to have to some extent. It tastes of grapefruit, pineapple, lemon and earth with a good bitter kick at the end. The earthy bitterness lingers, making up for the lack of body.

The Simcoe packs a big punch. It smells of pine, earth and citrus fruits – lemon in particular. Its flavour is big on the citrus character, with the lemon really coming through, backed up by a piney, dirty character. It’s slightly tart, with the lemon flavour really sticking to your tongue, and its bitterness really gives more body to the beer.

To me, the Summit, though, was the most different. It smells piney, earthy, with orange and lemon notes. Its flavour is far less fruity than the other four, with pine and earth (it’s quite dirt-like actually) dominating, with orange and lemon characters coming through, giving a slight tartness to the beer. The bitterness sticks to the back of your throat and lingers, and it has a decent body to back up the bigger, bitter, flavours.

What interested me the most was the difference in the body of the beer. All beers are 6.9% in alcohol, have the same malt profile – pilsner, cara-crystal and munich, and the same yeast. But to me the Summit had a far bigger body than the rest, with the Simcoe and the Citra also with a decent body, compared to the Neslon Sauvin and Centennial, which just tasted a lot lighter.

All beers were delicious though, and I’m continuing my hop education with each single hop beer Hashigo puts on tap. Interestingly, the tap beers seem to taste bigger in alcohol and in body than the bottled beers – even those with the same hop as the bottle.

¹ Mikkeller have done two single hop series – the first had 10 different hops (and then released Mikkeller 10 using all of those hops) while the second had 19. Some of the hops in the first series were also in the second, but there’s no one list that I can find with ease which has every single hop they’ve used. From the information I have been able to find on the net, my count is 24 different hops.